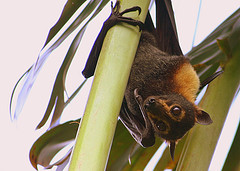 Lyssavirus is related to the rabies virus. Thankfully, Lyssavirus is a rare disease in Australia and only three human deaths have been recorded since it was discovered in 1996. People can be infected by bites or scratches from infected flying foxes or bats. There are vaccines to prevent infection and treatment after direct exposure can also be effective. It is important to seek treatment promptly if you have had contact with bats.

If you are bitten or scratched by a bat, immediately wash the wound thoroughly with soap and water, apply an antiseptic and get immediate medical help.

References used for this topic page