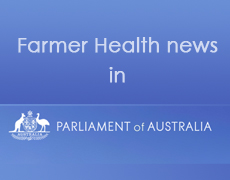 Senator McKENZIE (Victoria) (18:45): Earlier this week my Nationals colleague the Minister for Agriculture paid tribute to Australian family farms and their contribution to our country and economy.

2014 is the International Year of Family Farming. Tonight I would like to contribute to this important topic, taking the opportunity to promote the National Centre for Farmer Health. The International Year of Family Farming aims to raise the profile of family farming by focusing world attention on its significant role in eradicating hunger and poverty, providing food security and nutrition, improving livelihoods, managing natural resources, protecting the environment and achieving sustainable development in rural areas.

Here in Australia there are an estimated 135,692 farm businesses and 99 per cent of those are family owned and operated. Our farmers are impressive. Each Australian farmer produces enough food to feed 600 people per year, 150 here at home and 450 overseas. They produce almost 93 per cent of Australia’s daily domestic food supply and they export around 60 per cent of what they grow and produce. Those exports earned our nation $38 billion in 2012-13, while wider agricultural, fisheries and forestry sectors generated $41 billion in exports. The gross value of Australian farm production in 2012-13 was $47 billion, about 12 per cent of our GDP.

About 278 people are employed in Australian agriculture and there are over 1.6 million jobs in the agricultural supply chain and affiliated industries. This is why the health and wellbeing of both our farmers and the National Centre for Farmer Health are so important.